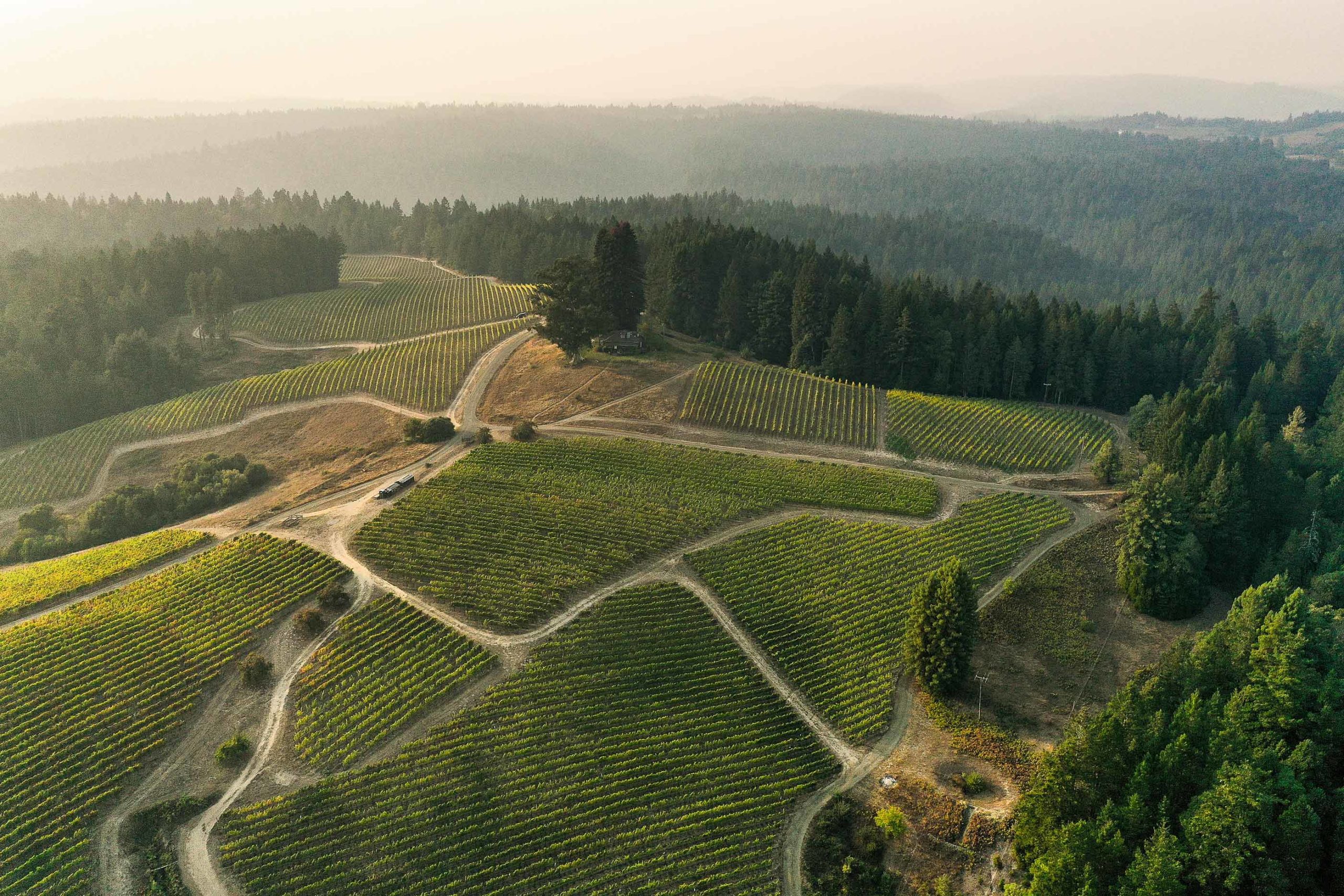 Musings on Micro-Climates: A Break From NPR

Does your car tell you the outside temperature? This is not a new technology – I have a 1994 Lexus that can do that – but it is more widespread now, maybe universal. How important is it to know the exact temperature outside? For a farmer, a couple degrees make a big difference as it all adds up over the course of a growing season. I like to point out how a neighbor 14 miles to the south of our vineyard and a mile or two closer to the cold Pacific Ocean actually ends up being warmer than me due to their higher elevation. Over the course of the growing season, the sugar in their grapes accumulates more quickly in the hotter temperatures and they pick a week or two earlier. Of course, the winemaker can affect the ripenness, deciding when to pick (when she feels the grapes are at their peak in terms of making the best wine), and how much crop the vines should be allowed to carry (heavier crops take longer to ripen). But the weather and climate those vines and grapes experience dictate the parameters of what styles of wine can be made and a degree or two a day does make a difference in the character of the wine.

It is great fun to drive around and track how much the temperature varies over a very short distance. The terrain in coastal Sonoma County is quite hilly with occasional gaps in the ridges where rivers drain to the ocean. This affects the relative temperatures among the various coastal vineyards whose relative differences to one another also alters greatly depending on the time of day. At the end of my afternoon drive inland from the vineyard, for example, at 2,400’ looking down on the Dry Creek Valley floor the temperature difference is only a few degrees (it is warmer on the valley floor), and then cools a bit as I emerge from the sweltering heat of the trapped valley floor into Healdsburg. In the morning, however, when I drive in the reverse direction to the coast, the temperature difference can be quite extreme, as during the summer the valley floor is flooded with marine air, sometimes covered by a ceiling of fog and the mountain tops bask in the morning sun. To really complicate matters, in the spring and fall as I drive uphill from Healdsburg the temperature drops as the fog is not as prominent and often a strong wind is blowing in from the Pacific Ocean at altitude.

As I continue to drive west to the vineyard, I hit what we call Las Lomas Pass. It is the divide between the Russian River watershed and the Gualala River watershed. The high point at the pass is cooler than the 2,400’ foot mountain top above Lake Sonoma by a degree or two as there is nothing to the west shielding it from onshore winds. As I drop down into the east-west canyons I notice a return to the valley floor phenomenon – it is colder in the early morning, warmer in the midday/afternoon. Why is this? Well, cold air is heavier than warm air and so it sinks, settling to the lowest point. In the afternoon, the steep canyon walls situated far away from the Pacific Ocean trap the radiated heat from the sun’s rays and create a hot box of still air. As a result, the diurnal swing is greater in trapped interior valley floors than higher up in the air. Does that matter? Many people use degree days based on a 24 hour average temperature to determine what should be planted in any given region, whether it is grapes or another type of crop. The Russian River Valley has acceptable degree day summations for growing Pinot noir, yet it experiences significantly warmer daytime highs and lower evening lows as it is close to sea level. Does the vine care how low the temperature is at night so long as they are above freezing? No and yes. Without sunlight the vine is not actively growing so it is essentially “asleep,” and it doesn’t matter if the temperature is high or low. The Russian River Valley daily average includes those low night time temperatures. So, during growing hours, it is on average much hotter than the degree days metric indicates in the interior valleys like the Russian River Valley. Many of you know this empirically when you are sweating in 90° weather in the “cool” Russian River Valley.

It is more complicated than that, of course. Things are happening at night. We know the Krebs cycle is restoring those NADH’s and NADPH’s in preparation for the next sunlight, and other biochemical reactions may be running along, maybe in reverse directions as they run in the day, and the rate of these reactions are temperature dependent, faster when warm and slower when cold. Could it be that flavor compounds that were synthesized during the daylight hours are catabolized (broken down) during warm evenings? Maybe. Certainly something biochemical is happening at high elevation vineyards when their evenings stay warm, at the same time as the vines in the cooler low elevation sites are quiescent.

Once I reach the canyon bottom, where Wolf Creek joins up with the Wheatfield Fork of the Gualala River, I follow the river downstream and out toward the Pacific Ocean, the source of the cold air. The road twists north and south as well as generally west, and there are distinct bends in the road beyond which you can see the temperature gradually drop. By the time you reach the bridge that takes you to our road, the Annapolis Road, you’ve reached the low temperature for the morning. The climb up to the hilltops will raise the temperature reading on your thermometer. Remember, this is the morning experience, the reverse is true after noon. As you crest out on Annapolis Road at roughly 770 feet at the old Ohlson Ranch, now planted to vines, the temperature steadies as you drive north into and out of the woods past the old Boyd Ranch and its vineyards. From there you drop down into the Fuller Creek drainage. Of course, it being morning, the temperature drops, but then as you climb up the other side toward the head of our driveway, the temperature does not rise quite to the same level as at the Ohlson Ranch as our bend in the ridge is closer to the coast and further out over the drainage. As you turn south through the gate onto our dirt driveway, the temperature drops another degree or two as you move further along the nose that peers over the Wheatfield Fork to the ocean. Yesterday afternoon (3:30 p.m.) when I drove in from the vineyard to Healdsburg, it was a warm 75° at our vineyard and it was 79° a mile east at the Ohlson Ranch. Sometimes it is only a degree or two warmer. Sometimes there is a wall of weakly offshore/high pressure which can be akin to driving through a transporter so dramatic is the temperature differential. This wall is often to the east of us, sometimes right on top of us and, rarely, to the west of us. What’s really neat and quite common is when the fog bank sits on top of the Miller Ridge to the west throughout the day keeping our temperatures cool, in the 60’s, maybe topping out briefly at 70° right before the coastal wind shoots up the canyon at noon.

All this discussion of temperature might be a tad tedious for the not-quite so geeky. I think it illuminates just how specific and how critical topography (how high, how exposed to ocean air) and geography (how close to the ocean, and the latitude on the west coast) are for vineyards on the coast. People frequently say our wine has great persistence and depth yet also subtlety and elegance of aroma. How is this so? This balance comes from the precise variations of our goldilocks location, not too high, not too low, and close enough to the ocean to be exposed to its cooling influence. This results in long growing seasons that allow for full flavor and tannin development without sacrificing acidity and accumulating too much sugar.

Time for me to head back to Healdsburg for dinner. I’ve got my fleece vest on over my t-shirt and I am wearing long pants. I will shed layers as I drive inland finding my own harmony with the micro-climates of my commute.